Power Sudoku2 was created by two Sudoku fans, looking for a better way to solve the puzzles. We founded Erasable Games to sell Power Sudoku2 and future games that can be played using dry-erase material.

Our mission is to make life more fun and save some trees in the process. 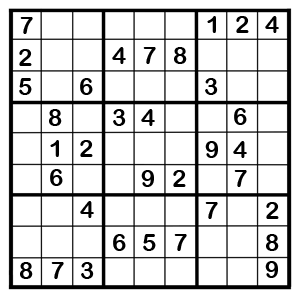 Sudoku is a Japanese word that means single digit or single number. Literally, Sudoku is a contraction of Su Doku, which is an abbreviation for “the digits must occur only once.”

Sudoku puzzles can be mentally challenging and positively addictive.

In Sudoku, only the single digits 1-9, in some order, are written into 81 squares (cells) shaped as a large 9 x 9 grid of squares. Within the grid are also emphasized 9 blocks of 3 x 3 squares. (See figure). The modern Sudoku Puzzle, called Number Place, was designed (anonymously but later deduced to be) by Howard Garns, and first published in May 1979 in Dell Pencil Puzzles And Word Games. (Read more at American Scientist Online.)

At least 17 symmetrically placed, given numbers (clues) are printed in the grid as the starting point of the puzzle. Then, based solely on logic (not arithmetic), you must place single digits so that they are unique to each block, and to each row and column, until the entire grid is filled in.

For this 9 x 9 size puzzle, there are 6,670,903,752,021,072,936,960 possible unique results that offer exactly one solution, so don’t worry about running out of puzzles to do. (Bertram Felgenhauer of Dresden, Germany, and Frazier Jarvis of Sheffield, U.K. obtained this number using combinatorial mathematics on June 20, 2005.)

Furthermore, the same puzzle looks totally different, when successively rotated 90 degrees, or by mirroring (reflection) or by relabeling the digits. When these effects are ignored, there are merely 5,472,730,538 essentially different Sudoku grids. (Ed Russell and Frazier Jarvis of Sheffield, U.K. obtained this number using combinatorial mathematics on January 26, 2006.)