I’ve been subscribing to Science News since 1995. [As I get older, Science (and Religion) become more fascinating.] It’s an excellent weekly news magazine of science, usually about 16 pages with minimal ads and concise (1-2 page), up to date articles. One of the features of Science News is an occasional column (blog) written by Ivars Peterson, called Math Trek Blog.

His articles focus on aspects of Sudoku in a clear, concise way and unlike other (opinion) columns, provide a bibliography to other sources of information. His latest, entitled Sudoku Class, provides information about Sudoku in classrooms, Math conferences and describes a Website by Dr. Laura Taalman (of James Madison University) called Brainfreeze Puzzles.

Although not updated in 10 months, Dr. Taalman’s site describes eleven Sudoku variants with examples. She is co-authoring (with Philip Riley) a new book called: Color Sudoku to be published in May 2007, containing examples of these variants. (Perhaps that is the reason for the frozenness [no pun intended] of her website.)

On her University website, Dr. Taalman conducted and preserved a Sudoku Puzzle Problem of the Week contest from January through April 2006. Thirteen downloadable Sudoku variant puzzles (with solutions also available) are shown there. I haven’t tried them yet but plan to.

As promised, another conceptual cartoon. I think of the stick-figure as “Cubic” and also “Cubehead”. I’ve always been fascinated by Fractals. A Science Fantasy story by Piers Anthony, called Fractal Mode gives a very accessible discussion of the experience of fractal worlds.

There’s an impressive video animation of a Sudoku puzzle (3 MB, 2:26) along with a soundtrack for which I could only hear the first two notes.

It starts and solves a puzzle step by step on Mark Huckvale’s Web site. He is a professor of Phonetics and Linguistics at University College London (United Kingdom).

The video starts with the given starting numbers and the next scene has all the possible numbers in the blank cells except for those used in the same row, column or block. As new numbers are inserted, the remaining unchosen candidates disappear. (A whole lot of erasin’ going on!)

Perhaps it would better mirror the solving reality, if the constraints of the digit being anywhere else but there, were highlighted also (and perhaps spoken). Nevertheless, it is an excellent and insightful example of solving a Sudoku puzzle in under 3 minutes. 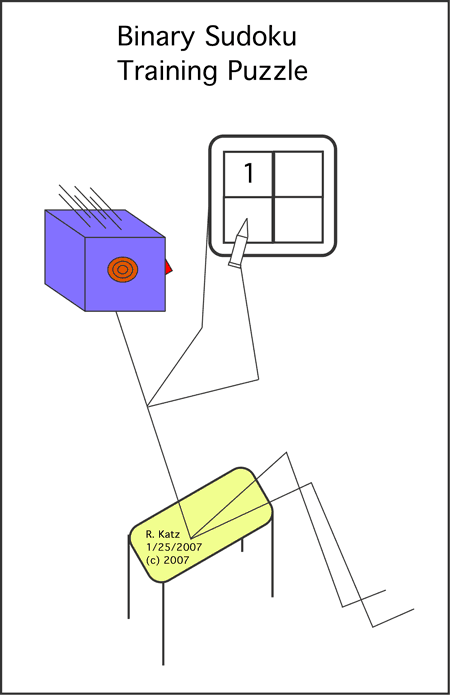 I’m starting a series of cartoons involving the varieties of Sudoku, that I believe are imaginary (but amusing). Who knows? it could happen in the future! I plan to issue them weekly until I have satisfied this creative byway.

This is Erasable Games’ Webmaster, just leaving a quick welcome note to all of you stopping by. Like Robert and Barb (and presumably you), I am also a Sudoku player, both online and of course on my trusty Power Sudoku2 white board. I’m really glad you’ve found our site, and I hope you find our products as helpful as I do in solving Sudoku puzzles.

You won’t be hearing much from me on the blog, as they keep me plenty busy around here. However, if you run in to any problems on the site or with ordering, or if you have any questions or comments, please feel free to contact us and let us know. We’d love to hear from you, and we’re here to help.